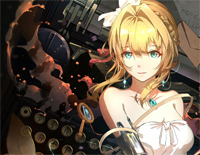 Free The Ultimate Price piano sheet music is provided for you. So if you like it, just download it here. Enjoy It!

The Ultimate Price is used as one of the original music from the anime Violet Evergarden. Violet Evergarden originally is a Japanese light novel series written by Kana Akatsuki and illustrated by Akiko Takase. Kyoto Animation published the first light novel on December 25, 2015 under their KA Esuma Bunko imprint. A 13-episode anime television series adaptation by Kyoto Animation aired between January and April 2018 with several advanced screenings taking place in 2017. An original video animation episode will be released in July 2018, while an anime film is scheduled to premiere in January 2020. And The Ultimate Price is composed by Evan Call.