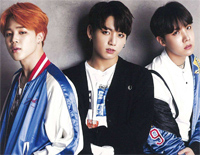 Free The Truth Untold piano sheet music is provided for you. So if you like it, just download it here. Enjoy It!

And The Truth Untold is included in their third Korean studio album Love Yourself: Tear. The album was released on May 18, 2018 by Big Hit Entertainment. he concept album explores themes relating to the pains and sorrows of separation. It debuted at number one on the US Billboard 200, becoming BTS' highest-charting album in a Western market, as well as the first K-pop album to top the US albums chart and the highest-charting album by an Asian act.