Sighs of Yunxi-Legend of Yunxi ED 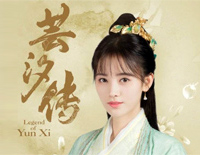 Free Sighs of Yunxi piano sheet music is provided for you. So if you like it, just download it here. Enjoy It!

Sighs of Yunxi
is used as the ending theme to 2018 Chinese television series Legend of Yunxi. The drama is based on the novel Poisonous Genius Consort by Jie Mo. It stars Ju Jingyi in the title role, alongside Zhang Zhehan and Merxat. The series will air on June 25, 2018 via iQiyi.

And Sighs of Yunxi is sung by Ju Jingyi who is a Chinese singer and actress. She rose to fame as a member of Chinese idol girl group SNH48 and was part of Team NII until her graduation in December 2017.