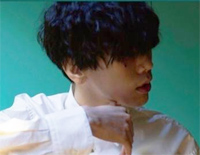 Free LOSER piano sheet music is provided for you. So if you like it, just download it here. Enjoy It!

LOSER
is a song by Japanese musician, singer-songwriter Kenshi Yonezu who began releasing Vocaloid music under the stage name Hachi (ハチ) in 2009. In 2012 he debuted under his real name, releasing music with his own voice. For creating songs, Yonezu uses music software Cakewalk Sonar. When he started to create Vocaloid music, he used Vocaloid 2 software, and Hatsune Miku vocals exclusively.