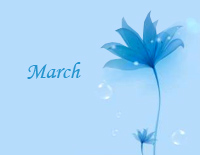 Free March 16 piano sheet music is provided for you. So if you like it, just download it here. Enjoy It!

March 16
is a piece of music by Johann Sebastian Bach. Bach was a German composer and musician of the Baroque period. He is known for instrumental compositions such as the Brandenburg Concertos and the Goldberg Variations as well as for vocal music such as the St Matthew Passion and the Mass in B minor.

A march, as a musical genre, is a piece of music with a strong regular rhythm which in origin was expressly written for marching to and most frequently performed by a military band. In mood, marches range from the moving death march in Wagner's Götterdämmerung to the brisk military marches of John Philip Sousa and the martial hymns of the late 19th century.