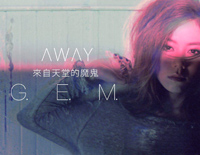 Free Away piano sheet music is provided for you. So if you like it, just download it here. Enjoy It!

Away
is a song by G.E.M. who is a Chinese singer-songwriter and actress, widely known for her vocal range and stage presence. She made her debut in the Hong Kong music scene with the release of her self-titled EP G.E.M. in 2008. This was followed by the release of 2009's 18..., 2010's MySecretand 2012's Xposed, which won the Hong Kong Top Sales Music Award for the Best Sales Local Female Vocalist.

And Away is included in her fourth studio album Heartbeat released on November 6, 2015 by Hummingbird Music.

Meanwhile, we also offer Count Down sheet music for you to download