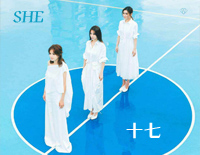 Free Seventeen piano sheet music is provided for you. So if you like it, just download it here. Enjoy It!

Seventeen is a song by Taiwanese girl group S.H.E as a gift for their establishment of 17 years. The group was consisting of Selina Jen, Hebe Tien, and Ella Chen. They formed in 2001 and are managed by HIM International Music. Widely regarded as the most successful and enduring Mandopop group, S.H.E has also acted in seven drama series, hosted two variety shows, and contributed ten songs to six drama soundtracks.

Meanwhile, we also offer I Don't Want to Grow Up sheet music for you to download