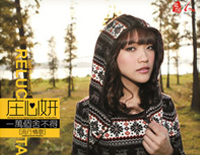 Free Ten Thousand Regrets piano sheet music is provided for you. So if you like it, just download it here. Enjoy It!

Ten Thousand Regrets
is a song by Ada Zhuang, a Chinese C-pop singer who started her music career in 2012. Since then, she has been gaining popularity in Mainland China and her albums have been also released also in Taiwan and Hong Kong.

Meanwhile, we also offer Goodbye Is Just a Stranger sheet music for you to download