Let's Not Fall in Love-Big Bang 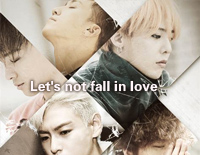 Free Let's Not Fall in Love piano sheet music is provided for you. So if you like it, just download it here. Enjoy It!

Let's Not Fall in Love
is a song recorded by South Korean boy band Big Bang. It was released digitally on August 5, 2015 by YG Entertainment, as the fourth single from Made, as part of the single album E. The song was announced on July 30, 2015. "Let's Not Fall in Love" received positive reviews from music critics and peaked at number one on South Korea's Gaon Digital Chart and on Billboard World Digital Songs.

Acting as a complement of the lyrics, the music video highlights the happiness of falling in love through the use of bright colours, and fun and innocent depictions of dates, which is contradicted by the close up shots that emphasise the member's worried faces. While the under exposed and dreamy tone reflects the video as fragments of a memory. The pastel-colored, dreamlike video features the five members running around a hazily-lit school courtyard, each taking on the role of boyfriend to five different models.

Meanwhile, we also offer Love Song sheet music for you to download