Kimi ni Furete-Bloom Into You OP 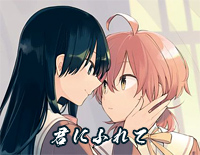 Free Kimi ni Furete piano sheet music is provided for you. So if you like it, just download it here. Enjoy It!

Kimi ni Furete
is the opening theme to the anime series Bloom Into You. Originally Bloom Into You is a Japanese yuri manga series written and illustrated by Nio Nakatani. The manga began serialization in the Japanese monthly shōnen manga magazine Dengeki Daioh on April 27, 2015, and is published in Japan by ASCII Media Works under the Dengeki Comics NEXT label. As of January 2018, five tankōbon volumes have been released. The manga was licensed for English release in North America by Seven Seas Entertainment on February 14, 2016, and its first volume was released in January 2017. An anime television series adaptation by Troyca premiered on October 5, 2018.