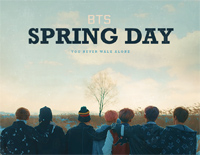 Free Spring Day piano sheet music is provided for you. So if you like it, just download it here. Enjoy It!

Spring Day
is a song recorded by South Korean boy band BTS. Released through Big Hit Entertainment, it was the first single from the repackaged album Wings, released in 2017 as You Never Walk Alone. The single was a success, topping the Gaon Digital Chart, and has since surpassed 2,500,000+ downloads. The song also won 'Song of the Year' at the 2017 Melon Music Awards.

Spring Day is the longest charting song on Melon by an idol, as of July 10, 2018 charting for seventy-three weeks and counting. The prior song that charted the longest was BTS' Blood Sweat & Tears. Upon release the song in South Korea became BTS' first "roof hit" and remained number one in real time on MelOn for twenty-four hours. It also ranked number one on eight other South Korean portals.