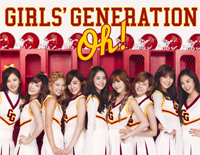 Free Oh! piano sheet music is provided for you. So if you like it, just download it here. Enjoy It!

Oh!
is the lead single from South Korean girl group Girls' Generation's second studio album with the same name Oh!. The song hit #1 on various charts, and won several times on the Korean music chart shows Music Bank and The Music Trend. The song ranked #4 on Gaon Chart Top 10 Digital Songs of the Year and it was also the second best selling single in that year, selling over 3.3 million copies.

Oh!
was remade as a Japanese song for the group's second single titled, "Oh!", from their second Japanese album Girls & Peace.. It was their fifth Japanese single. The music video for "Oh!" was released on September 14, 2012. Promotion for the single began on Hey! Hey! Hey! Music Champ. The single ranked highly among Japanese music charts, clinching the top spot on the Oricon Daily and Weekly single chart as well as the top spot on the Japanese Hot 100. The single was released with the song, "All My Love Is for You", on September 26, 2012, with an accompanying music video premiering on September 14, 2012.


Meanwhile, we also offer Divine sheet music for you to download
[ + More Information ]