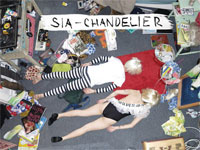 How to install ActiveX?
0

Chandelier EOPM is provided for you and if you think it can be optimized such as adding the dynamics etc, welcome to provide us with the more perfect Chandelier EOP and EOPM!

Chandelier is a song by Australian recording artist Sia from her sixth studio album, 1000 Forms of Fear (2014). Written by Sia and Jesse Shatkin and produced by Shatkin and Greg Kurstin, the song was released on 17 March 2014 as the lead single from the album. It is a pop song, featuring electronica and reggae influences. Lyrically, the song has a melancholic theme, detailing the demoralization and rationalization of alcoholism through the typical thought process of a "party girl."