ANNIVERSARY-Magi The Kingdom of Magic OP 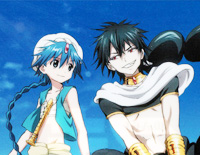 ANNIVERSARY EOPN is provided for you and you can open it with EOP NMN Follow ME plugin to play ANNIVERSARY piano by following it. Enjoy Now!

ANNIVERSARY is used as the opening theme of the anime series Magi: The Kingdom of Magic. It began airing on October 6, 2013 and is the second season of Magi: The Labyrinth of Magic which is a Japanese anime based on a manga written and illustrated by Shinobu Ohtaka. Produced by A-1 Pictures, it began airing in Japan on October 7, 2012.