Happniss Is Not A Love Song 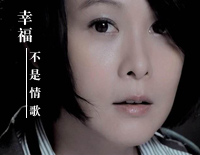 
"Happniss Is Not A Love Song" is sung by René Liu (traditional Chinese: 劉若英; simplified Chinese: 刘若英; pinyin: Liú Ruòyīng) who was born June 1, 1970. She is a Taiwanese actress and singer. She is the first to win Best Actress awards at the Asia Pacific Film Festival in both television and film productions. She has several albums out including I'm Fine (我很好).