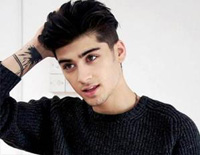 Like I Would EOPN is provided for you and you can open it with EOP NMN Follow ME plugin to play Like I Would piano by following it. Enjoy Now!


Like I Would is a song recorded by English singer and songwriter Zayn for the deluxe edition of his solo debut studio album, Mind of Mine (2016).It was written by Zayn, Chase Wells, James Griffin, Kevin Rains, James Emerson and Salvador Waviest, and produced by XYZ.