A New Day Has Come-Celine Dion 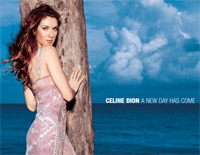 A New Day Has Come is a song recorded by Canadian recording artist Céline Dion for her sixth English-language album of the same name (2002). The song was written by Aldo Nova and Stephan Moccio and produced by Walter Afanasieff and Nova. It was released as the album's lead single on March 11, 2002. "A New Day Has Come" is a piano-driven ballad in 6/8 time. However, the midtempo radio remix, co-produced by Christian B & Marc Dold of (S.A.F.) along with Ric Wake was released as the lead single. Both versions are included on the album.