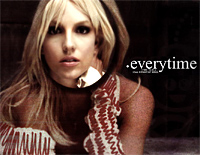 Everytime EOPN is provided for you and you can open it with "EOP NMN Follow ME" plugin to play "Everytime piano" by following it. Enjoy Now!

Everytime is a song recorded by American singer Britney Spears for her fourth studio album, In the Zone (2003). It was released on May 10, 2004, by Jive Records, as the third single from the album. After Spears ended her relationship with pop singer Justin Timberlake in 2002, she made friends with her backing vocalist Annet Artani. They started writing songs together at Spears's house in Los Angeles, and then traveled to Lombardy, Italy, where "Everytime" was written. Spears composed the music on her piano, and she developed the lyrics with Artani. According to Artani, the song was written as a response to Timberlake's 2002 single "Cry Me a River" and various of his radio interviews. Spears has neither confirmed nor denied these allegations.