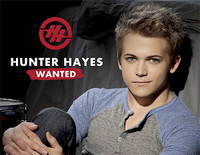 Wanted EOPN is provided for you and you can open it with "EOP NMN Follow ME" plugin to play "Wanted piano" by following it. Enjoy Now!

Wanted is a song co-written and recorded by American country music artist Hunter Hayes. It was released in March 2012 as the second single from his début album Hunter Hayes. Hayes co-wrote the song with Troy Verges. The song was nominated for a Grammy Award for Best Country Solo Performance at the 2013 Grammy Awards.