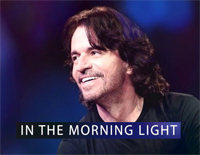 In The Morning Light is a music by Yanni, a Greek pianist, keyboardist, composer, and music producer who has spent his adult life in the United States. Yanni has employed musicians of various nationalities and has incorporated a variety of exotic instruments to create music that has been called an eclectic fusion of ethnic sounds. Influenced by his encounters with cultures around the world, his music is said to reflect his “one world, one people” philosophy.