Mother, You Are Really Great - KO One OST 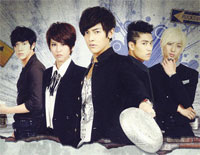 Mother, You Are Really Great is used as an original soundtrack of KO One, a 2012 Taiwanese drama starring Jiro Wang, Calvin Chen, Aaron Yan and Danson Tang. The drama was produced by Comic International Productions and was first broadcast in Taiwan on cable TV Gala Television (GTV) Variety Show/CH 28 on 26 November 2012 to 27 May 2013.

Mother, You Are Really Great - KO One OST-Leave a comment